CLIMAX describes a young team, after a three-day rehearsal of a dance performance, decided to relax with a party. A group of young people from all over Europe, with different skin colors and excellent dance skills. But the party didn’t take long. They suddenly found that the wine seemed to have been taken the drug because everyone’s behavior gradually got out of control. They started to do some crazy things like incest, rape, dancing and licking more medicine. This remote building revealed its true face on this snowy night — there are a carnival and torture of the dead. It has been said that the first 45 minutes of the film can be regarded as the most controversial film segment of the year. Although the dancers’ rehearsals and the bar’s musical performances were taken, they were used in a way that the audience had never seen before, and the effect was amazing. Gaspar Noé was a frequent visitor to the Cannes Film Festival, and his style of boldness often exceeded the physiological limits of the audience. 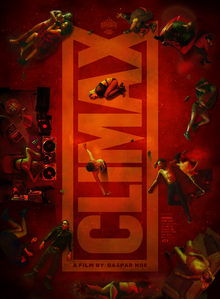 Gaspar Noé said that he had been fond of improvisation for a long time. When he made his first movie, and he thought it was very important to write the script. But the more movies he made, the better he was good at deciding on the position and composition. Undoubtedly, Gaspar Noé believed that the decisions he made on the spot were the best. He also pointed out his actors did not know who the protagonist would be tomorrow because he often told them at the midnight of the previous day. He preferred to call everyone together and tell them about the shooting task tomorrow, then they would know what to do tomorrow. This is his favorite game.

It is not difficult to imagine that the effect of this film is out of the imagination because of Gaspar Noé. His choice of actors, music, and light provides the audiences a buffet for our eyes. The delicate clothes and the unique shooting technique represent the good quality of this film. Furthermore, the picture reversed for a few minutes, which offered a sense of mess and disrupt.Though the film revealed some dark sides inside the people’s heart, it still remains hope and integrity in people’s mind.

Undeniable, this film uses its unique artistic shooting method to create an exciting atmosphere no matter inside the movie or outside it. The truth is almost every viewer was affected by this film and the film ended in the audience’s warmest applause.

View all posts by Jianhan